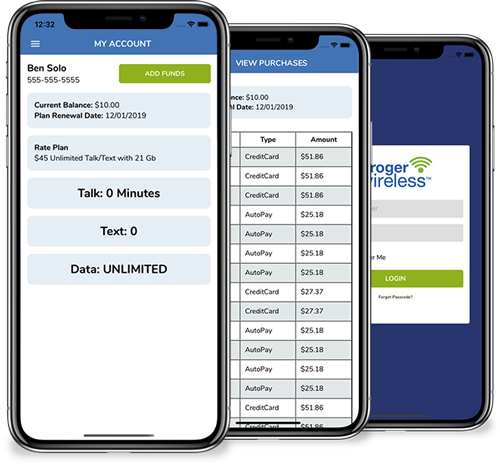 Kroger Wireless (formally i-Wireless) is the phone plan provider of Kroger, the nationwide grocery chain. There are many brands under the Kroger Family, which include: Kroger, King Soopers, Pay Less Super Markets, Fred Meyers, and more. Kroger Wireless provides affordable phone plans under the Sprint network.

As part of a recent rebrand, I was approached by Mark Strong, the Director of Network Operations at Kroger Wireless, to develop the new Kroger Wireless My Account application. This application is built using NativeScript for Vue.js to allow for both iOS and Android builds of the single codebase. In addition to NativeScript, this application also uses TypeScript and consumes back-end API data via Axios.

This application has since been launched in the Apple App Store as well as the Google Play Store. Kroger Wireless is pre-installing the "My Account" mobile application on all phones sold in their stores. Most notability in Cincinnati, Seattle, and Oregon.

I am the developer and consultant on this project. I am responsible for all the development and maintenance of the application as well as connecting it to the Google Play and App Stores.

NativeScript was considered and approved for this project so we can build and deploy iOS and Android versions of the same codebase. This is a project that I work on as a freelancer outside of my day job. Kroger Wireless' mobile application is an ongoing project with more improvements planned soon. Including rebranding the application for their sister company Access Wireless.

His Words Not Mine

Dave have been an excellent web developer resource for Kroger Wireless. He totally redesigned our mobile app and was attentive and flexible to our input, while working independently and remotely! I'd highly recommend Dave as a top-notch development resource.